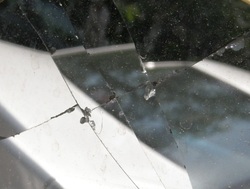 
As I stare listlessly into the mirror, the fuzzy image gazing back at me is someone I barely recognize.  But I do.  They say prison causes profound changes in a man, and the most extraordinary stem from the most incredible circumstances.  The man in the mirror has undergone an unimaginable plethora of alterations because he is the absolute worst thing one can be in prison:  an innocent man.

I detect the bitterness in his hazel eyes, the constant worry wrinkling his forehead, the anxiety setting his jaw like cement, and the frustration that has lightened his hair from brown to salty beige.  But still, occasionally, I notice the soft smile of the gracious man I used to know, the kindness in his eyes and the youthful, even naive, wonder underlying his visage.

I witness as he struggles for control over his flagging emotions; his quiet humbleness as he is degraded by those who believe  by mere coincidence of fallaciously bestowed power, they are superior in some way; the way he continues to strive for good, despite the oppression surrounding him; how he never puts himself before others; and he helps whenever he can.  The man in the mirror is tired of fighting but he cannot stop, he was never taught how to give up.  But like Atlas, his back groans under the weight on his shoulders.

I have observed the battles passing through his head as he combats the onslaught of vengeful thoughts for those who lied and cheated to set him up, refusing to hate them, regardless of their perfidious aspirations.  The pain he feels for his loved ones, who he is powerless to protect from these people, seems to consume him with the voraciousness of a lion on the third day of an unfruitful hunt.  He is tortured by his inability to provide the warmth and joy he once gave to his children, and what they (and he) are missing each day.  I rarely glimpse hope in his eyes anymore.

I sometimes wonder if he will make it.  He seems to know there is little chance for retribution in a society which persecutes based on loose insinuation, vicious accusation, and thoughtless supposition, but refuses to accept it.  He seems to linger in reminiscence of a day long gone, a day in which greed and narcissism did not pervade everything, a day in which distorted imaginations were not permitted to pervert wholesome interchanges with delusional exaggerations.  He seems to stick to his beliefs as if they are the only branches within his grasp during a devastating flood of irrationality.  It is like watching a bridge crumble, one speck at a time over a century; each bit takes an eternity to weaken the structure, but none can be replaced once it has fallen to be swept away by the current.

However, I still think he will overcome and persevere, because I have never seen his determination waver.  And, as all of us in this situation know, prison mirrors are not very clear.