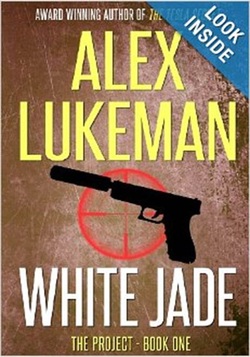 White Jade (The PROJECT: Book One)
By Alex Lukeman

This is the first book in The Project series, so it’s very fitting for it to be my first review.  It is self-published on Amazon through CreateSpace.

What it’s about:  An ex-Marine, Nick Carter, full of emotional and physical scars from the Afghan war and previous conflicts, is now working with a covert Presidential squad called The Project.  He is assigned to investigate the murder of a billionaire by a mysterious Chinese group.  He discovers they are after a 2000-year-old book which supposedly reveals the secret of immortality.  He teams up with the murdered man’s daughter and together they must stop the group before they seize power of the largest military force in the world.

Look/design:  The cover is well-done, although a bit plain.  I love the scuffed metal background and the gun and gunsight graphic.  It’s very appropriate to the genre – quickly and efficiently broadcasting what to expect from this book.  I would like to see something more eye-catching and spectacular, so I’m rating it 18/20.

Editing/formatting:  The first thing that struck me when I opened the book was more than an inch of blank space on each side of the page.  That’s a LOT of empty space!  And to make it more conspicuous, the top and bottom margins were only about a quarter-inch.  It bothered me enough to subtract a point.  It slightly bugs me that the page numbers are on the right-hand side of each page instead of alternating on the outside edges, but not enough to deduct points.

I expect occasional typos, misspelled words, and missed punctuation, but noticed very few.  The only thing troubling me was the lack of dialog attribution in places.  I understand wanting to avoid boring the reader with the constant ‘he said/she said’ tags, but there were several places where I was unclear who was speaking, and had to backtrack to figure it out.  I hate being taken out of the story, and took off two points.  Otherwise, the grammar and flow of the narrative was superb.  Excellent language use and sentence structure made the story fluid and kept it moving at a great pace.  I never stumbled once over the meaning of a sentence.  Bravo!

My only other suggestion would be to list his other books and perhaps include a chapter from each.  Rating:  17/20.

Content:  I’ll preface this critique by saying I put military thrillers close to the bottom of my preferred genre list.  Having divulged that fact, I loved this story!  Part of my enjoyment was because the tale included some ancient history, and part due to the complex political struggles, and also because it had an element of ‘Indiana Jones’ to it.  It was intriguing and exciting from start to finish without resorting to ‘superhero’ tactics where the protagonist accomplishes everything while suffering 50 bullet wounds, two amputations, and a liver transplant.  I personally prefer more realistic characters and action scenes, and this book delivered.  There was no Superman – just an average Joe doing his best.  OK, maybe a well-trained GI Joe.

This author has an amazing talent for description.  The images were all vividly painted, except the love scenes (which I personally would rather be left to my imagination) – they came off as slightly awkward.  The physical settings and action accounts were well portrayed and I could picture them playing through my mind like a movie while reading.  Mr. Lukeman did not attempt to overwhelm the reader with his technical knowledge, although given his military background, I’m sure he has it.  The only weakness in the entire story was the language descriptions, and I doubt they could have been explained without becoming too much of a distraction to the story itself.

The background and history were well-laid.  The characters each had their own feel, except the villains.  Some of the scoundrels were not completely fleshed out and I found a couple to be rather bland or cliché, although not enough to deduct more than one point.

The plot was very smooth.  It kept moving forward in a believable manner.  I could find no major holes or inconsistencies.  I had a few questions, but nothing serious enough to make me roll my eyes or fail to continue believing in the ‘realness’ of the story.  My only complaint was about the ending – I thought it was too fast and sudden, and then flattened for the wrap-up.  A little bit of an anti-climax.  Rating – 58/60.

Summary:  Overall, I thought this book was excellent.  I have purposely tried to be cautious, but I have a feeling this will be one of the highest ranked books I will review.  I highly recommend it to anyone who likes the genre, and to those who don’t.  An awesome work, and even more impressive to me since he is an Indie author who managed this degree of quality without a big-time publisher to polish and back his efforts.  I will definitely read more of his books.

Footnote:  I should have added a point to the overall total because Mr. Lukeman is a musician.  As a fellow guitar player, that’s a bonus to me, but I have to remain subjectively objective.  However, I do hope he plays metal or at least some hard rock.  Rock on, Alex!