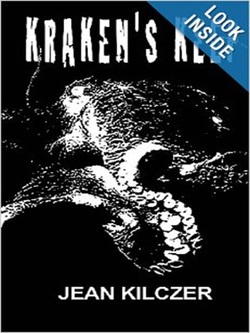 This review is from the paperback, self-published through CreateSpace.

What it's about:  A marine biologist and a commercial diver stumble upon a monster in the deep.  The two race across the world to study, and stop, this newly discovered species.

Look/Design:  The cover is solid black with only the title and author name on front, with a very grainy image of an octopus or something – it was really difficult to discern.  That may have been intended, and didn’t bother me.  What did bother me, was the total lack of a blurb on the back.  Nothing told what this book was about, and I was forced to guess from the title and picture.  I was in murky waters and drained five points for this.  15/20.

Editing/Formatting:  The print in this book was tiny, and left an extra inch of space on the right-hand side of each page as well as the top and bottom.  This was just a minor ripple in the waves, and I drained another point for it.  As always, I found some typos and errors.  I start counting them and if I lose track, I start deducting points.  Most notably, there were dozens of instances of quotes missing or simply surfacing on their own from lack of air or something.  Again, this was just a minor leak, and the water level only reduced by one point.  There were an acceptable amount of other glitches, typos, missing words and random mis-capitalizations or lower case letters.  This book would definitely float a little higher with at least one more run-through.

The structure and grammar were excellent.  There were very few grammatical errors I would be capable of catching – mostly the obvious typo variety.  On only a few occasions did I have to go back to decipher a sentence.  Very clean and neat writing.  The only argument I had was on some punctuation – and dammit, isn’t two octopuses octopi?  I’m not sure, so if I’m wrong, I apologize – if not, I’d suggest fixing it since it’s the subject of the book.  Overall, I found calm waters in the editing - smooth sailing.  18/20.

Story/Content: This story was full of action and quite a bit of wit.  The characters were all interesting in their own little ways and very endearing in many others.  But, like an ocean, it sometimes rolled about randomly; waves crashing in different directions, causing the reader to be pulled away from the story to faraway places, drifting at sea.  Like a wave, it had its ups and downs.  The crests were really high, but the lows were sometimes really low.  I felt the story flatten out into a calm pond for quite a while.  Don’t get me wrong, I liked the diversions, but they really kept me away from the meat of the story – some were just too long.  Because the stories within the story were still interesting, I didn’t pull the plug on it, but they did detract from the main plot and occupied too much space, so I let out two points worth of water, then plugged the hole.

My knowledge of marine biology is limited, but I wasn’t overwhelmed by the terminology, and understood each thing Jean described.  She is a very descriptive writer and paints a vivid picture.  Her scenes play out like a movie – I love that.  It was a bit preachy at times, but I never let political differences muddy the waters – although it’s still worth pointing out.  To be honest I think it perfectly portrayed the zeal and views of most in that field.

The ‘float by night’ ministry had me cracking up, as did several other unique creations in Jean’s water world, but there were also a few choppy seas to navigate.  These displaced about four points in the wash, but the few inconsistencies did not cause any major flood damage.  I felt a lot more could be done with the ‘language’ of these monsters and it wouldn’t hurt to teach a couple of these marine biologists to swim, since they work in the water.  54/60.

Summary:  Overall, it was a fun and interesting read, and I recommend it to anyone who likes an adventure story or monster mystery.  The problems I found in this story can be easily overlooked, but I really do recommend some fine-tuning.  Everything I mentioned could be easily fixed in one edit.