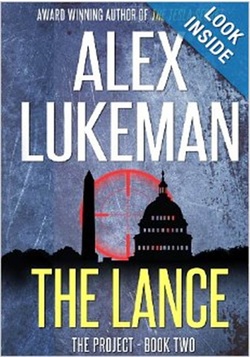 The Lance (The PROJECT:  Book Two)
By Alex Lukeman

I was wrong.  I thought Alex Lukeman’s first ‘Project’ novel (White Jade) would be the best I would read this year.  Then I read the second installment, The Lance.  This is another book self-published through CreateSpace.

What it’s about:  This time Nick Carter is knee-deep in a sinister plot involving the fabled Spear of Destiny.  He and the black-ops Project team must stop events sure to lead to another World War.

Look/design:  This cover has the same feel as his first book – the metal texture background and the gunsight graphic lend continuity to the series.  Simple and effective, this tells me the genre and ‘feel’ of the story at a glance.  I do prefer the blue color, and with the added Washington landmarks silhouettes, it grabs my attention better than Book One.  However, I feel the back is a missed opportunity and could have been filled with more information or graphics.  I’m rating it 19/20.

Editing/formatting:  In this book, the problem with the margins has been fixed, and the text fills the pages much better.  Also, the page numbers are on the outer edges.  I still had some trouble with the lack of dialog tags, but it seemed to be not as common.  I found a few typos and other errors, but nothing major.  One of the minor annoyances was the lack of consistency when he used certain word(s) such as bullet-proof/bulletproof/bullet proof.

Again, his sentence structure and flow were superb!  I can’t say enough about how well Mr. Lukeman writes.  He does not try to impress his readers with his vocabulary, but makes each sentence move the action with ease and efficiency.  He obviously is very intelligent, but doesn’t try to show off his knowledge by making his audience feel like they need a dictionary or thesaurus to understand what he’s saying.  Rating:  19/20.

Content:  The Lance was much crisper than White Jade, and more deliberate.  Again, I had to marvel at how effortlessly he sets up the scenes.  His descriptions and details are cinematic and the action is realistic. I felt the characters still had their own personalities and were rock-solid.  The history of the ‘Lance’ was in keeping with my own research, and I love the assumptions made to incorporate it into this fictional account.  My only problem with the way he wove the legend into his novel is that I didn’t get to use it in one of my own books!  I had originally planned to use it in my Chronicles of Time series.  Great minds think alike, Alex.

The runes and symbols were a delightful bonus, although Selena’s expertise on the subject still didn’t prove as valuable as I would have liked.  The best part of the story to me is the underlying truth of collusion at the highest levels.  It is stunning to think of the corruption in our government; it’s something I often allude to in my writing, and Lukeman puts an even more sinister face on it.  In all, I easily rank this story up there with (or better than) works by Clancy, Baldacci, Child, or any of the other big dogs in thrillers.  My only complaint is that this installment had a little too much of the ‘miraculous coincidences’ prevalent in most spy/thriller plots, but even so, it kept me enthralled enough to suspend my twinges of disbelief.

I’ve read a lot of Nazi stories and researched extensively for one of my own books, in addition to spending thousands of hours playing Doom, Castle Wolfenstein, and Spear of Destiny.  My point is, it’s been done countless times, but this plot still sucked me in.  Lukeman managed to put a unique twist on an old story.  Rating – 59/60.

Summary:  Another excellent book by Alex Lukeman.  I’m a sucker for stories mixing ancient legend and history, religion, politics, etc., and he’s proven to be an expert at weaving all the elements together to create something fresh and exciting.  You’re blowing up my rating system, Alex!

Purchase The Lance from Amazon.com